“Sometimes it seems as though our disagreements over everything–from politics to business to the designated hitter rule–are more serious and more divisive than ever before. People are making emotional, knee-jerk decisions, then standing by them, sometimes fighting to the death to defend their position. And yet, weʼre optimists.”

That’s the headline for the folks who manage ChangeThis, a project that publishes manifestos. They now have a list of over 60 pages of PDFs whose topics run the gamut: from technological innovation to ending racism with mindfulness to startup revolutions.

This project consists of some of the smartest people in the world laying it all on the line to try to move the needle on progressive ideas. I found it because I searched for The Bootstrapper’s Bible, a book dedicated to – you might have guessed – pulling yourself up from the bootstraps to create a thriving business.

Besides the basics of nutrition and regular exercise, where are we to discover well-being? The answer is simple.

But it’s so hard to achieve.

There are three fundamental aspects to the good life:

If we have community and connection, we have a social system that promotes our highest potential and soothes us in turbulent times.

Though these won’t matter if we don’t have the disposition to appreciate them. And a lack of rightful understanding and conduct leads to toxicity and dysfunction in our lives. So it’s necessary that we strive to know what it means to embody good character.

Search for different or competing perspectives.

The most innovative organizations strive for people to challenge the status quo.

Be the best. Seek conflict.

Columbia University has launched a program called the Open Syllabus Project that analyzed 6,000,000 college syllabi in the world to see what the most assigned books are.

They recently came out with an interactive visualization of it. Check out Open Culture to learn more.

The list is great because it opens a world for discovering books that experts have decided are worth exploring to ensure a well-informed citizenry.

1. The Elements of Style by William Strunk

2. A Writer’s Reference by Diana Hacker

6. The Communist Manifesto by Karl Marx

Adam Grant in his book Originals relays a lot of useful information. I’m about halfway through the book and already have learned about the relationship between what Internet browser is used and productivity, how to better guarantee your ideas are hits, and the different factors involved with selling a novel idea to an organization.

But my favorite thing I’ve learned is this: Artistic interest drives intellectual accomplishment.

A study that looked at differences in levels of interest in the arts between Nobel Prize-winning scientists from 1901 to 2005 and their scientific peers revealed that the awarded group was dramatically more likely to be involved in the arts than less accomplished scientists. The chart below illustrates this. 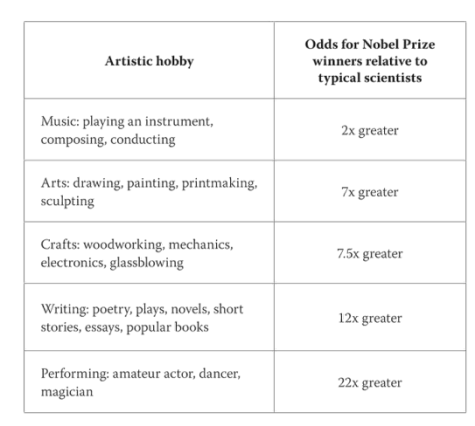 Additionally, Grant notes that “a representative study of thousands of Americans showed similar results for entrepreneurs and inventors. People who started businesses and contributed to patent applications were more likely than their peers to have leisure time hobbies that involved drawing, painting, architecture, sculpture, and literature.”

The personality trait that most associated with an interest in the arts is called openness. This is “Openness to Experience, or openness to considering new ideas … [It] describes a person’s tendency to think abstractly. Those who are high in Openness tend to be creative, adventurous, and intellectual. They enjoy playing with ideas and discovering novel experiences. Those who are low in Openness tend to be practical, traditional, and focused on the concrete. They tend to avoid the unknown and follow traditional ways.”

[Note: Sorry about the late post. My laptop charger isn’t working, and yesterday was busy. We’ll be back on track tomorrow.]

I found the attached picture on Reddit a few days ago with the headline “This photo taken in Paris perfectly captures the spirit of an era.”

My first thought was that the poster was right. We live in an era characterized by a willful disconnection to many social problems. It seems like if it’s not impacting people directly, they would prefer to ignore the problem – presumably out of selfishness or a belief that they can’t do anything about it, so they shouldn’t let it be a burden.

But I think that there’s more that needs to be said. The trouble with social media is that it boils down complex issues into pithy, superficial headlines. And, let’s be honest, most of us just read the headlines. This results in taking sides without thoughtful consideration of the context or other pertinent factors and could likely be a leading cause of much of the polarization we seem to be experiencing.

Our era is characterized by much more than mere selfishness. Don’t believe me, check out reddit.com/r/wholesomememes. Here’s a taste:

Most people are not walking around looking to one-up each other. Sure, there’s a lot of competition. But to boil down the 21st-century Western world into a unique kind of psychopathic self and technological-absorption is ridiculous.

We are complex creatures, experiencing unique realities with different values.

However, there has been some progress made that gives insight into some common themes.

At our deepest, for instance, we all want connection, a meaningful life, and to feel loved and accepted – both by ourselves and by others.

Selfishness, greed, corruption, ego trips, prejudice, and abuse have existed since the dawn of civilization.

Moses freed the slaves. Native Americans battled for territory. And tycoons built America on the backs of people with no access to education.

Never underestimate the difficulty in attempting to define an era. There are powerful stories and nuanced truths everywhere.

The story of the grass growing can be purely scientific. You can focus on the photosynthetic process and the intricacies involved with the conversion of sunlight to energy. Or it might be about values and ethics. Kentucky grass is foreign to many areas, and its use in many yards is contributing to a decrease in native prairies, which harms local wildlife. Or they can be spiritual and enchanting. The Talmud says that “Every blade of grass has its angel that bends over it and whispers, ‘Grow, grow.'”

Yes, there are problems. There always will be. But you can choose faith, hope, idealism, and wonder or you can choose cynicism and nihilism. Both tend to be equally correct. Right now there’s simply no way to know for sure. And secretly we all want to take the first route.

Here’s a simple reminder you can keep with you for hope when all seems to be going wrong: we tend to crave a happy ending.

Our schools are about teaching kids facts and discipline.

They don’t encourage them to think creatively.

And they don’t build character.

Curriculums, sports, and misguided cliques tend to foster people who value competition, lack a toolkit for critical thinking, and don’t know how to think seriously about what the moral thing to do is.

Schools should be asking more of kids.

Instead of turning in boxtops or cans, they should be working on a community garden, feeding and spending time with the homeless, and sharing their talents with kids in lower-income communities.

There should be lessons about what a dollar does for their neighborhood and how it’s wasted at a big corporation.

And acting out needs to be understood rather than punished.

Technology threatens the old saying that “it takes a village.”

Let’s be proactive, get grounded in the fundamentals of loving homes, and think seriously about how to raise good villagers.